No one wants to have a washing line up all the time, and who wants to be bothered hand winding it back in. The year is 2020 and it’s about time you treated yourself to a fancy new washing line. Ok, maybe we sound a bit too excited there but you should definitely get one that’s going to make hanging out the washing a lot easier as its a chore no one wants to do.

Here are some of our picks of the best retractable washing lines that we found on the internet. Some of these can be as cheap as £10, while some can cost over £100 so it just depends what your budget it is.

As we mentioned above in the introduction, this is definitely our favourite washing line. This is based on the price as its cheap, and also the fact you get 30m of washing line but it also available in a 15m model as well.

With it being a twin line system you can have both going to different corners of the garden which keeps them away from each other and ensures you can get all your washing out to dry in 1 go.

Each of the washing lines is made from durable metal with a PVC coating which means it will be kind to your clothes and leave no marks on them. The PVC has also been UV treated which will stop it becoming weak over the years of exposure to the sun.

It can be installed easily and even people with no real DIY skills will be able to attach this to the wall with a drill and some screws in a few minutes. It could even be attached to a fence if it is strong enough. It comes with a quick-release system which is perfect for when it gets too cold for drying your clothes outside. This means the line can be popped into the garage or shed to help keep it out of the cold winter elements.

When doing our research we found that most customers absolutely loved it and they were not even aware you could get a double retractable washing line until they saw this one. 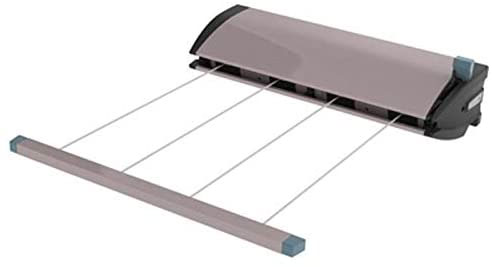 We think this one is more suited to if you have a smaller yard but want to utilise the drying space you have. It may even suit a large balcony as well. What it does so well is it uses 4 lines in a short length as it extends to a maximum of 6.5m with a minimum of 4m so make sure you measure up first.

It needs both parts to attach to the wall. One part with the lines that come out and 2nd part will be where the end of it clips into. That is the only downside of this really as it will require you to fit 2 parts onto 2 different walls which might not look great and could be a bit tricky to put up if you are rubbish at DIY.

When doing our research we found that users had mainly positive things to say and said it was a well-made piece of kit.

We thought it would only be fair to include some indoor washing lines as not everyone has access to an outdoor space to dry their clothes and this is true if you live in a flat. Ideally, you would use a tumble dryer but not all clothes can be tumble dried.

The indoor ones are usually a bit more lightweight than outdoor ones, and that is the case with this one. It is recommended that you install it in the bathroom and images show it over the bath as that’s probably about the right size and length that you want to dry your clothes.

Overall it has a drying length of 22 metres as it has 5 lines that come out of it.

When doing our research we found that people liked the item but said be careful not to overload it as some peoples internal walls in the house are just cavity walls and not made to support a lot of weight. If you have big heavy towels then be very careful and it might be best to dry these over the edge of the bath. This is a normal basic washing line that just has 1 line on it. It is very similar to what I have in my own garden at home and I’ve had mine for about 3 years now.

This one is made from high-quality plastic that looks like it will withstand the British weather. It is easy to put up on the wall or fence and comes with some screws to allow you to do that.

It has a quick-release system which means it can be taken off the wall for the winter when you are not using it and that will help make it last longer as it won’t be out in the cold which over the years might weaken the line ever so slightly.

The maximum weight it can hold is 15kg.

When doing our research we found that users were happy with this item. One user said that the last one she had for 12 years before needing to replace it but a few others said there’s only lasted a year, so there really a mixed set of reviews out there. 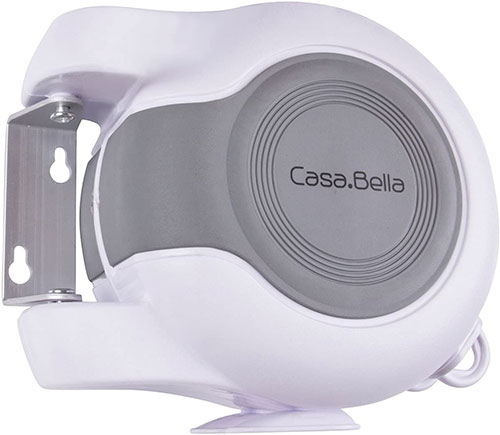 Casa Bella is not a brand I had heard of before putting this article together, but when I saw this item I knew I had to include it.

It is available in both a single or double washing line but for the extra money it’s probably worth going for the double as you can always just use 1 line on that anyway. The single has a total of 15m drying space while the double is 30m.

Like many of the others on the list, it comes with brackets to mount to your wall and can be done easily if you have some basic DIY knowledge and a drill.

When doing our research we found most reviews to be very positive and people found it easy to install. A few users said it would struggle when under full capacity, but I think that’s the case for most on this list so just be careful what you put on and spread the washing out evenly. 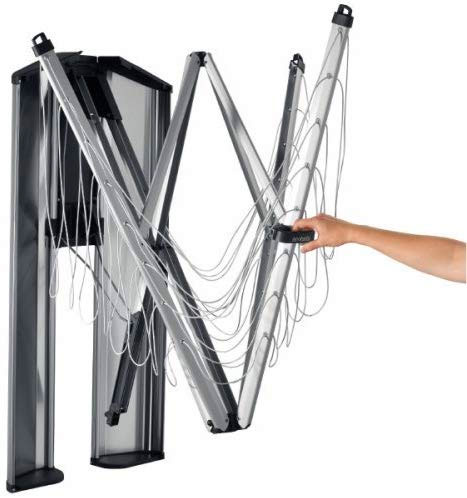 This is the 2nd washing line we have featured on our list from Brabantia and this one is a belter! it is different to all the others on the list which were retractable lines. This one is more like a rotary washing line except it won’t need a hole in your grass and can be placed flat on the wall when not in use which is perfect for those who have a small patio or balcony with a limited area to dry their clothes.

With it being Brabantia you know it’s going to be a decent quality piece of kit and that’s why they offer it with a 10-year guarantee which is really good.

The total dry length is 24m which is pretty good for the shape of it. We don’t think its quite as good as a traditional line as there won’t be as much airflow if it’s full but we would put it up there as being one of the best on this list. The total weight it can support is 20kg which is large enough for a normal wash.

This all depends on your situation and what space you have.

A single line is the most basic and as there’s only me and my wife at home it suits us perfectly as we don’t have loads of washing.

If you have kids, then a double line could definitely be the way to go as you may have more than 1 lot of washing to do in a day and get dry. This is especially true if the kids are playing sports or you have lots of school uniform to get clean over the weekend for the week ahead.

We really liked number 6 on the list which is a wall-mounted rotary-style dryer. If we had limited space then this would be our option.

Outdoor or Indoor Use

Most on this list were for outdoor use, but they were a few that were suitable for a small balcony which can almost be considered indoor use as they are not stretching far over a massive garden.

The outdoor lines have tougher PVC housing and they will also be made from sturdier material to make sure they do not rust the metal inside and help protect them from the sunlight.

We hope the above choices have been helpful to you and have made you realise how many options there are out there. Retractable washing lines are really much better than an old-style washing line that you have to wind up by hand each time, and the lines all sealed away from the elements when not in use. Also, think about how much money you will save on your electricity bill by not using the tumble drier. 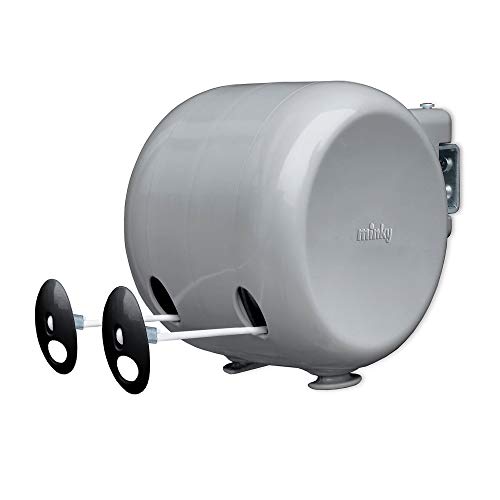