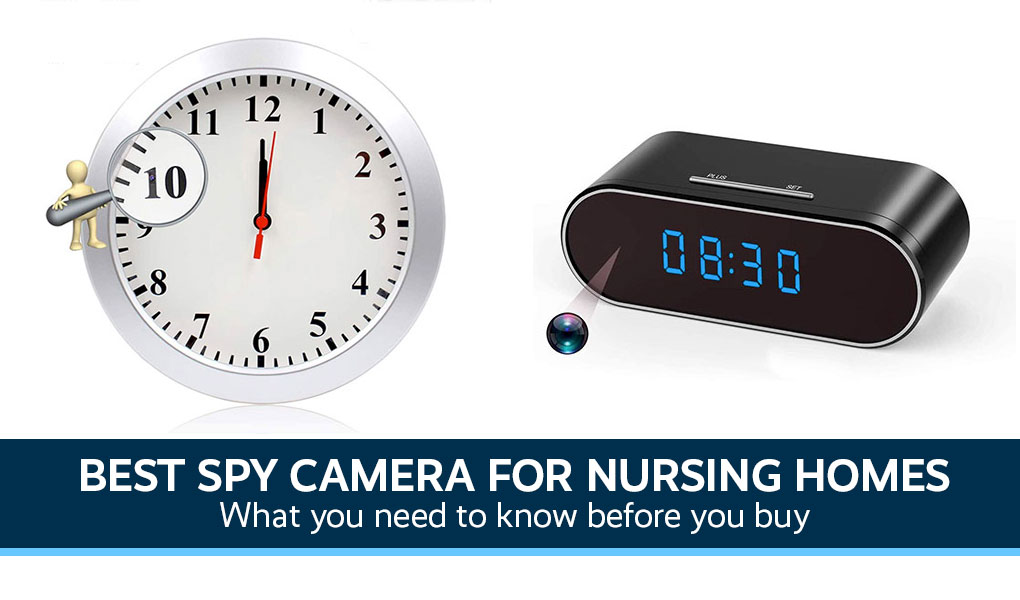 With the population ageing, and care costs rising, you want to make sure that your elderly relatives are taken care of. While there are a lot of high-quality care homes out there that do a fantastic job there’s a lot out there that do let the side down. There are always stories in the paper about patients being neglected or not looked after by a member of nursing home staff who should know better.

While we are not entirely sure if this is ethical and recommend you do it at your own risk it could be worth looking at installing a surveillance camera in the nursing home to give you peace of mind. My Grandma was in a home for many years, and we think she was very fortunate that her home was a good one. Let’s now take a look at some of the best spy cameras UK.

Best Hidden Cameras To Use In Nursing Homes In The UK 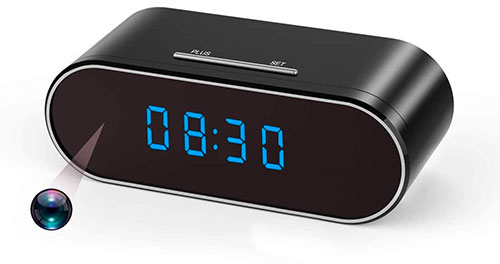 First in our list of best spy security cameras is this fantastic looking piece of kit and there’s no way you can tell there’s a camera inside this at all. This doesn’t just suit care homes but could be used anywhere to help improve home security and doesn’t just have to be used to look out for a loved one.

This surveillance camera has a 140-degree camera which is wide-angle and streams at 1080p which makes sure you can record whatever you need in high quality.

There is built-in motion detection on this hidden camera which you can turn off. If you have it on, it will automatically send you a push notification to your phone but we don’t think this is something you need on all the time in a nursing home as chances are it will go off a lot (if connected to wifi). However, you can record without the wifi straight onto a 128gb SD card which will record all the movements, so I guess it depends how often you are going into the nursing home to take the card home and go through the footage.

Night vision is standard on this surveillance camera, which is good as that means nothing will be missed.

The one downside of the wifi push notifications to your phone is that you need to be able to connect it to the nursing homes wi-fi so that it can stream to your phone. I am not sure if all care homes randomly give out wifi access but I am sure if you ask they probably will. 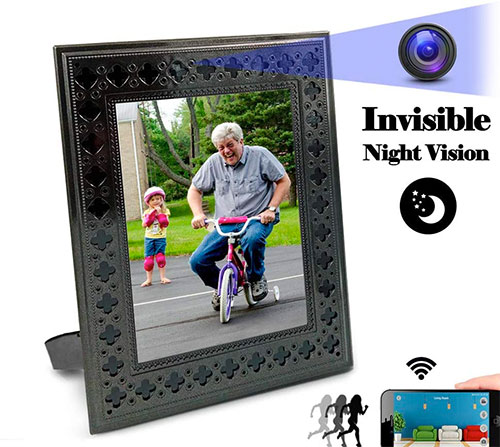 This is a great way to get a spy cam in inside a care home. Most people in a care home are likely to have pictures up of their loved ones, so this will look out of place at all. It’s not cheap, but its definitely one of our favourites on the list.

This will need to be connected to the wifi at the home to stream video footage to your phone but once that’s set up you can be anywhere and check in on your loved one. it works great whether it’s placed on a bedside table, or on the wall with some other photos. The hidden camera inside has a 15 degree down angle, so it’s worth placing it slightly higher up to where you want it to view.

It will only record when motion is detected and it also plays back the sound for you as well so you can hear whats going on.

If you cant get on wifi then that’s no problem as it will record everything straight to a micro SD card (bought separately) which can store plenty of footage for you to collect.

Like a lot of the other cameras, it has night vision which is great and battery life is reported as being decent. 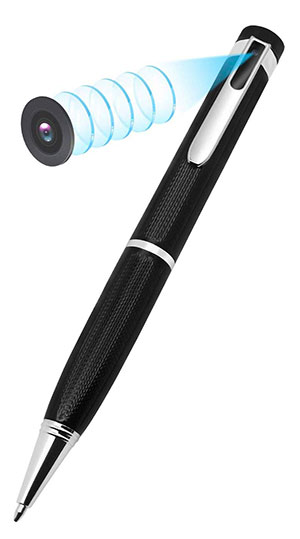 Next on our list of hidden cameras is a spy pen – think it’s one of the least likely to be looked at as being suspicious. Just set it up across the room in a desk tidy or pen pot and away you go. Even though it’s small it’s still packed full of features such as a 32gb internal memory to record the video footage This means you don’t have to go out and buy an extra SD card to put inside it. It would also work great as a security camera in an office and not just a care home. 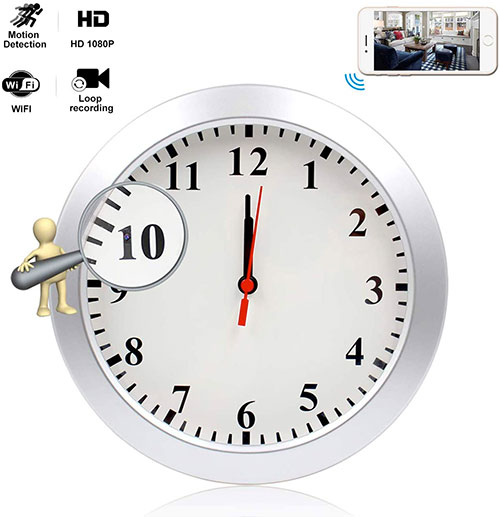 Another great option as chances are it will be placed quite high up and capture quite a lot of the room which will allow you to get decent footage. It has a 1080p quality hidden camera with a really wide range of 160 degrees. Inside it has wifi which means you can stream this to your mobile phone at any time you wish to check on your loved one. The hidden camera lens is behind the number 10 on the clock.

You can record directly onto a micro SD card which can be placed inside it. It supports up to a 32gb card which is not supplied with this item.

When looking at reviews of this item we found that people were really happy with it. Most had used it in home offices to catch employees pinching office supplies and they were very happy with the results. This is one of our favourite spy cameras.

Next on our list of the best spy equipment list is another great item that no one would expect. The lense isn’t right in the middle as you would expect, but its in the back arm of the frame which makes it a hidden camera that no one is going to find. This could be placed on the bedside table, or on a counter at the end of the bed and look like just a pair of reading glasses.

Inside there is an 8gb micro sd card which is included. Once it gets full it will just overwrite and do loop recording. It can support up to 32gb of storage space though which is nice.

The video quality on these is not as good as others on our list as its only 640 x 480, but that should still do a decent enough job to capture what you need. It takes 1 hour to charge via USB. 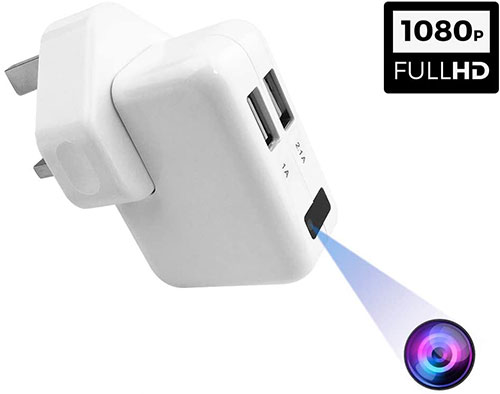 Last on our list of spy cameras is a plug camera. We really like this one as its just a bit different. It connects into a regular power outlet which can be used as a USB charger.

It would work really well just on the wall next to the side of the bed and capture who is going in and out very easily.

Videos are saved in 5-minute intervals meaning you will never miss anything important.

Works on both PC and MAC.

There are many different options when it comes to hidden cameras. We will now go through some of these in detail.

If you want cheaper items, go for the pen or glasses but if you have more of a budget then the picture frame is our favourite.

Wifi or no wifi

Wifi will be important to those that want to sit at home and keep a closer eye on every move. If that’s not something you are bothered about them then you can just check the memory card that is inside them. This could be tricky as you don’t want to get caught by a staff member removing the card from the spy gear as they will wonder why you mess around with the clock every time you are around.

Some of these spy cameras have loop recording which is good but sometimes it means if it gets full it will start overwriting itself from the start of the memory card.

This is something that you need to look at when buying a hidden camera. How often will it need changing? You don’t want something that needs changing each week.

We think for a care home camera this is something hidden cameras should have otherwise the memory card is going to get full very quickly.

Not all of the above spy camera uk have audio recording. Some of these spy cameras just have motion detection to record the video.

Only put a hidden camera in if you are really sure something bad is going on. Don’t just put one in for the sake of it, as it really is a breach of privacy.